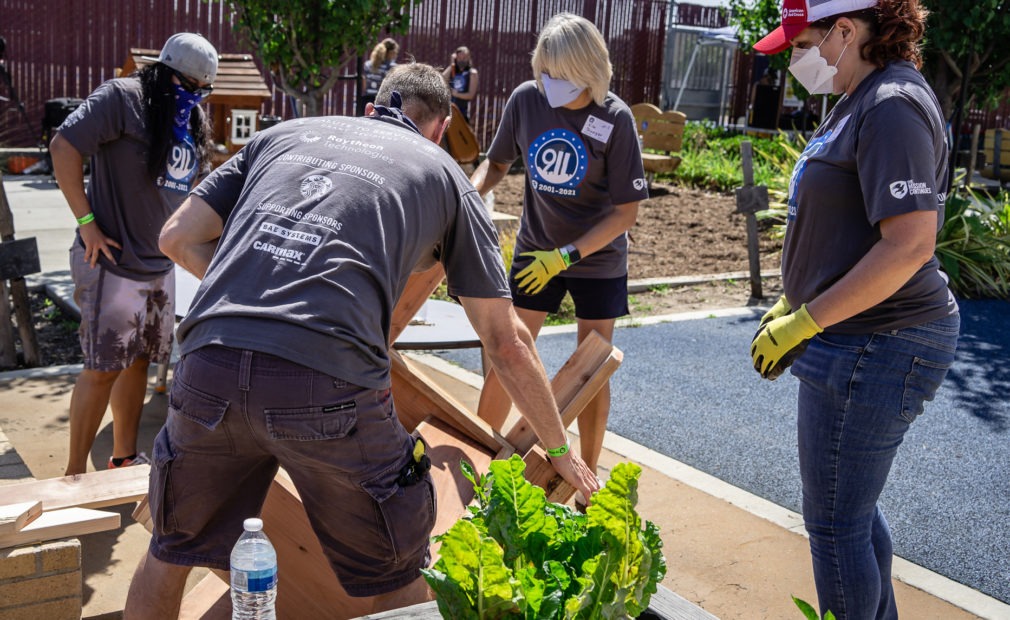 On a beautiful Saturday afternoon, more than 60 volunteers gathered at Wanda Mikes Early Childhood Center in South Los Angeles for the second Signature Service Project of Operation Enduring Service. Led by Marine veteran Josue Guerrero, LA native and Platoon Leader for The Mission Continues, veterans and volunteers beautified the outdoor play area and created safe gathering places for children to enjoy. Throughout the day, the passionate group of veteran-led volunteers from across the greater Los Angeles area came together for a common cause, to invest in the youngest members of the community.

Children who are able to experience quality early education and child care receive long-term benefits. They have better math, language, and social skills as they enter school, and, as they grow older, they will require less special education and will progress further in school. The preschool-aged children came back to school on Monday to find new benches, planters and colorful murals to brighten the area.

The Wanda A. Mikes Early Education Center provides services for children in a community that has been hit hard by decades of systemic neglect and more recently by the pandemic. The center provides a learning environment filled with an assortment of natural materials and activities for children to learn-through-play while developing critical thinking and problem-solving skills. To learn more about Operation Enduring Service, click here

Browse through the photogallery to learn more about the Los Angeles Signature Service Project!

“I feel like we, the veterans that served together, have a lot of work to do. I would like to bring back that same feeling that we had back in 9/11 when those towers had fallen,” Guerrero said. “We were all united and supported each other and I was proud of that moment. I think the 20th anniversary is a good opportunity for us to look back at our ups and downs, but move forward together; as one team.”

After Josue was medically discharged from the Marines, he felt isolated, and struggled to find a sense of purpose. While receiving treatment at the local Veterans Affairs medical center, he met a veteran involved with The Mission Continues, who spoke to him about an upcoming service project to rebuild a Salvation Army home for homeless veterans. He accepted an invitation to participate and met with some of the organization’s leadership.

As he moved up the ranks from a routine volunteer to a platoon leader in Los Angeles, Josue travelled across the country, led impactful service projects, and has been outspoken about his struggle and mission to bring back a sense of honor and respect to the communities he serves.

The Los Angeles Service Platoon is dedicated to serving the Promise Zone, comprising neighborhoods within Hollywood, East Hollywood, Koreatown, Pico Union and Westlake. The LA Platoon also supports the Partnership for LA schools in the Watts and Boyle Heights neighborhoods, taking action to improve neighborhoods by improving school grounds and fostering educational opportunities for the youth in underserved neighborhoods.

“You are all part of something much bigger that’s happening across the country. We want to inspire everyone around us to serve,” said Mary Beth Bruggeman, president of the Mission Continues. “[We’re here] to celebrate the 20 years of service that have taken place since that day and to then think [about] what the next 20 years could be if we could all capture that spirit of service and be inspired by it,”

We will never forget the sacrifice and service of our veterans and volunteers in the 20 years since 9/11 as we look ahead to the next 20 years of service in our communities. Join us in New York City on September 18th for the next Signature Service Project.

On, and around, September 11th, 2021 thousands of veteran volunteers will lead and support service efforts across the country to commemorate the 20th anniversary of the 9/11 terrorist attacks, recognizing the service and sacrifice of the all-volunteer force that served in the wake of that day. These veterans and volunteers are deploying to cities all across the U.S. to help under-resourced communities, continuing their show of strength through service.

With more than 60 projects happening in 40 cities across the country from September 1st through November 11th, visit The Mission Continues Service Platoons page to find a project near you!