What is the Alumni Network?

Once you’ve completed one of our programs—from leading a Service Platoon to participating in a Mass Deployment, and everything in between, there’s still an opportunity for you to serve and connect with other veterans.

Continue to serve alongside other alumni

Sound like you? Then you’re in the right place!

Have any questions about the program? Send a note to T’Liza Kiel, Director of Alumni Engagement at tkiel@missioncontinues.org.

Join your fellow Alumni in our Facebook Group, sign up for our newsletter, or attend our frequent Town Halls and programming! We’ve had 10 events so far this year (almost all virtually, but we’ll be gathering in person once restrictions are eased) so join us over Zoom to connect and learn.

We’re always on the lookout for alumni ready to share, and we’ve launched the Alumni Speaker Series to share that expertise in our network with the wider world! Want to take part? Please let us know here. 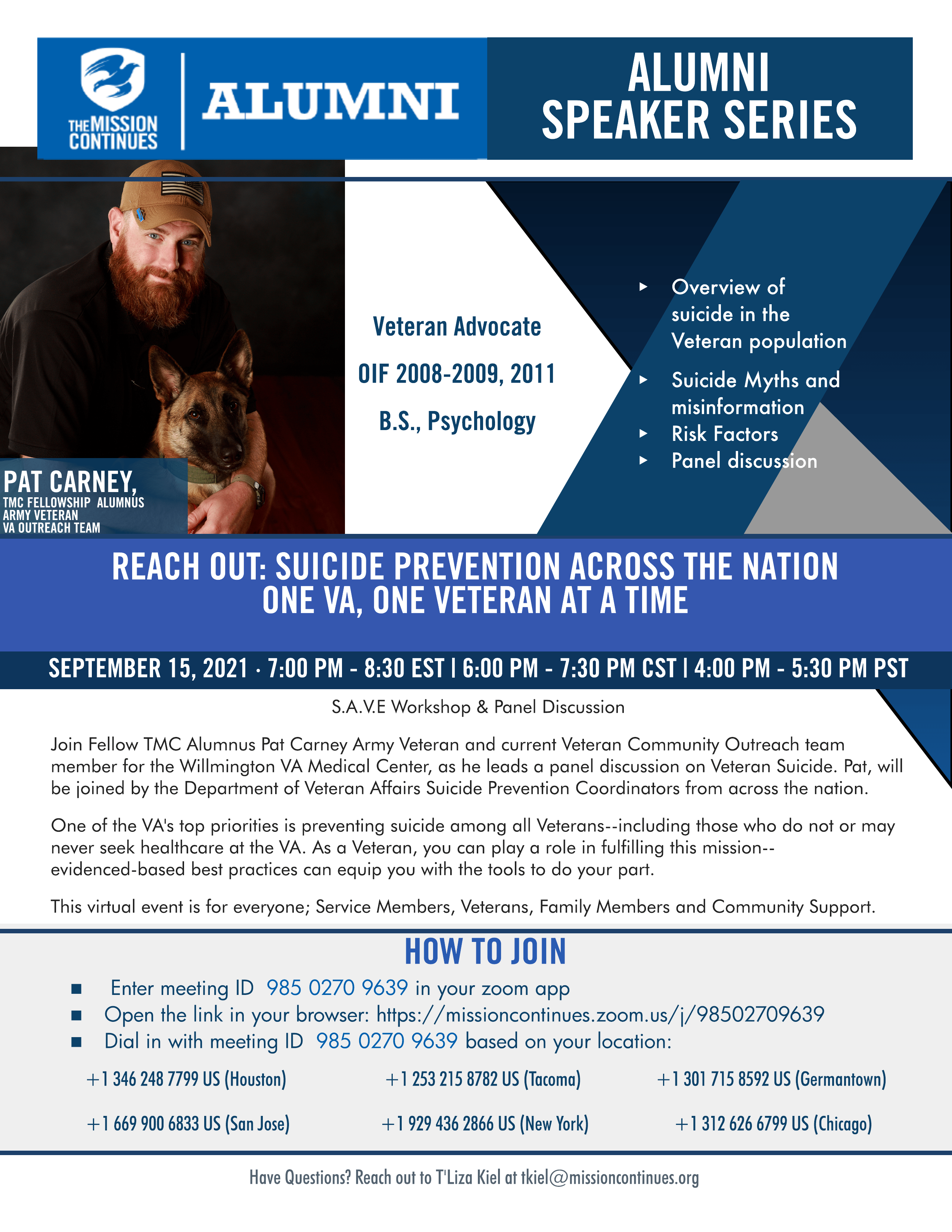 Register in advance for this webinar

Watch some of the Alumni Speaker Series:

Do you want to help organize an Alumni Social Convening in your area? Are you great at social media and want to help manage the Alumni Facebook Group? Or perhaps you have great resources for the greater veteran community that you want to share via a blog post or a webinar? Please let us know here.

If you are interested in being featured during our Alumni Spotlight or would like to nominate another Alumni, we’d love to hear it. We welcome stories ranging from personal successes to interesting resources available for other veterans. Head here to fill out the form!

Have another idea of how you can get involved? Send a note to T’Liza Kiel, Director of Alumni Engagement at tkiel@missioncontinues.org. 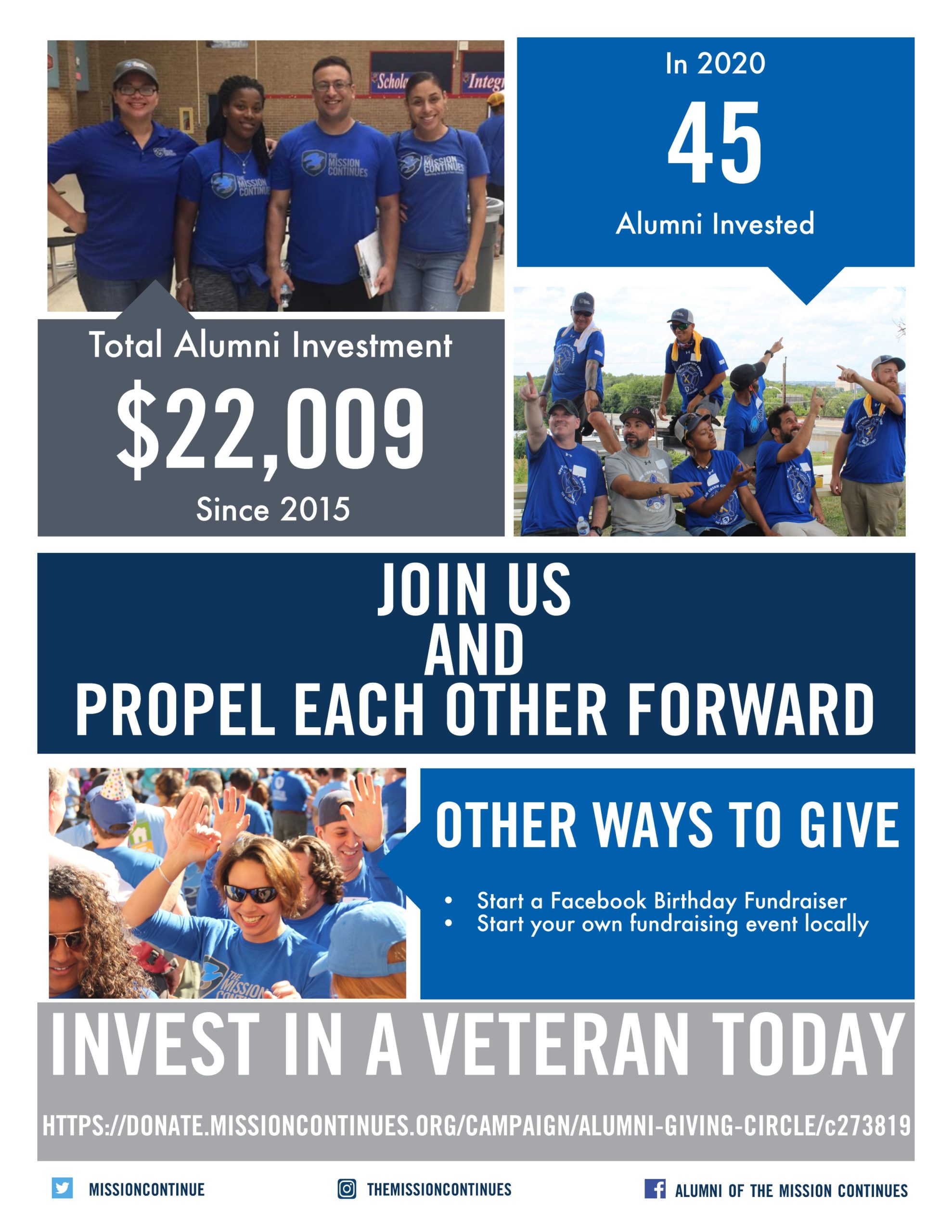 I became a Marine in August of 2001, spent the majority of my enlistment in Cherry Point, North Carolina and deployed to Iraq as part of Operation Iraqi Freedom in 2004. Those four years were the most impactful years of my life. I would go on to serve an additional year when I was recalled to active duty in 2008 for another deployment overseas. After separating from military service, I moved around a lot looking for my place in civilian life. It is easy to look back now and see the signs of Post-Traumatic Stress Disorder, but at the time I thought something was wrong with the world, not with me. It took a long time for me to realize how my experiences in Iraq had stayed with me. I worked to identify my problems and begin to address them.

One issue I discovered was my need for purpose. My civilian employment did not offer the sense of purpose I longed for. I remembered seeing a commercial about a veteran service organization called The Mission Continues. I cracked open the laptop, found the website, and registered for the next community service project. At the time, the event itself didn’t matter. I simply wanted to explore the world of volunteering and determine if that could feed my need for purpose. The event took place at a food bank in Orlando, Florida where we built mobile food storage units that were distributed to local schools in the area. My eleven-year-old son, who was my support since I had been out of work and undergoing therapy for PTSD, attended the event with me. I was nervous and I didn’t know how I would respond. Although you wouldn’t know it just by looking at me, my heart was pounding and my nerves were on red alert throughout the entire event. On the outside, I was just another volunteer with a drill in his hand but inside I was a mess. The only thing that kept me grounded was spending time with my son, teaching him how to use tools and complete the task. As bad as I felt because of the stress created by this new challenge, I fell in love and there was no turning back.

I approached the Platoon Leader, Yaritza Perez, and asked, “How can I help?” Next thing I knew, I was participating in weekly planning calls, helping plan events, flying to a Platoon Leader summit, and accepting the role of Platoon Leader in January of 2020. I cannot fathom where I would be if I had not signed up for that first event. I would go on to serve nearly two years as Platoon Leader and participate in The Mission Continues’ Service Leadership Corps. My time serving as a Platoon Leader and the completion of SLC unearthed my desire for purpose and provided me with the skills to translate my military experience into leadership and service in my community. While serving as Orlando’s PL, I applied, interviewed, and accepted the newly created role of Alumni Program Specialist. For the first time since departing the Marine Corps, I truly feel I am where I belong. This opportunity to continue my service is the opportunity of a lifetime. My Mission Continues! I am a better husband, father, and person because of The Mission Continues. 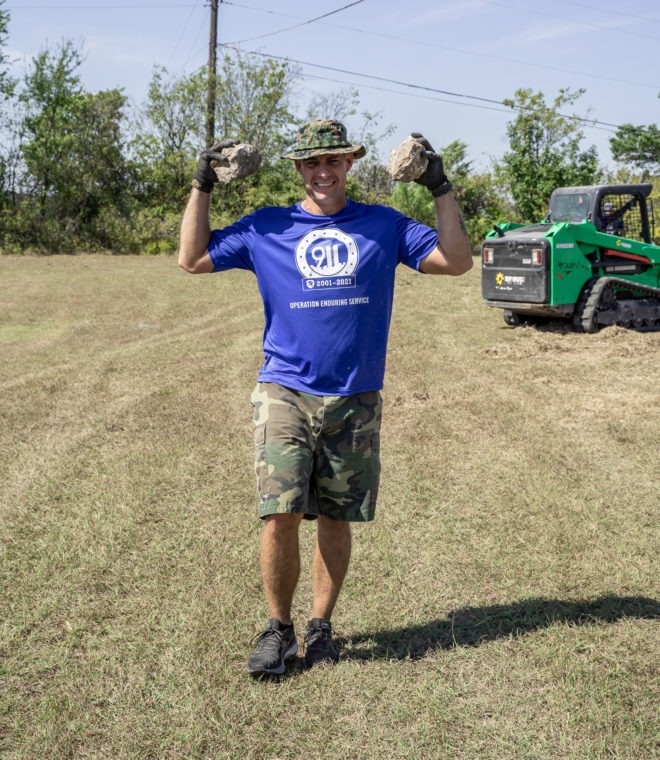 Read what other Alumni are up to: 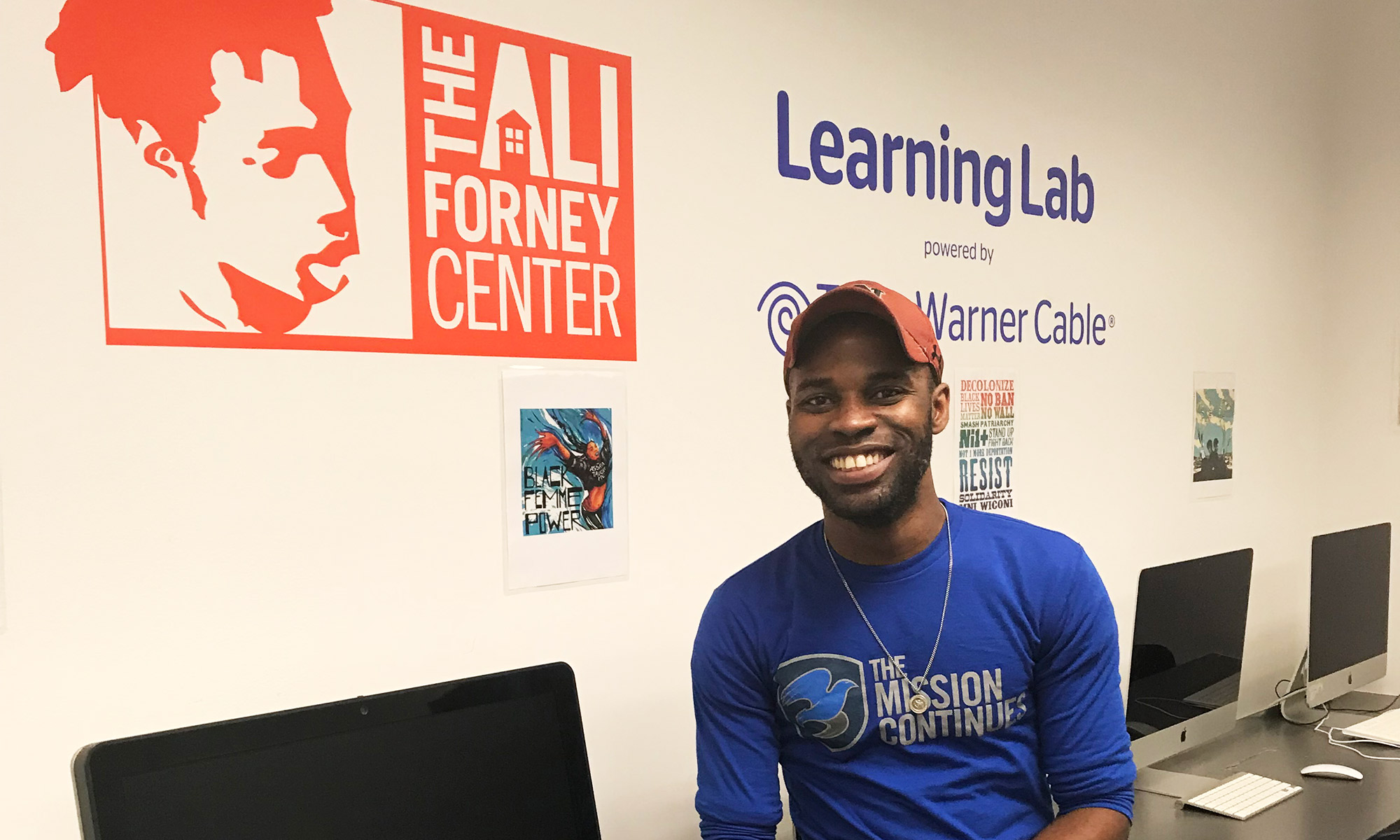 Service Platoons The Bridge Between Communities 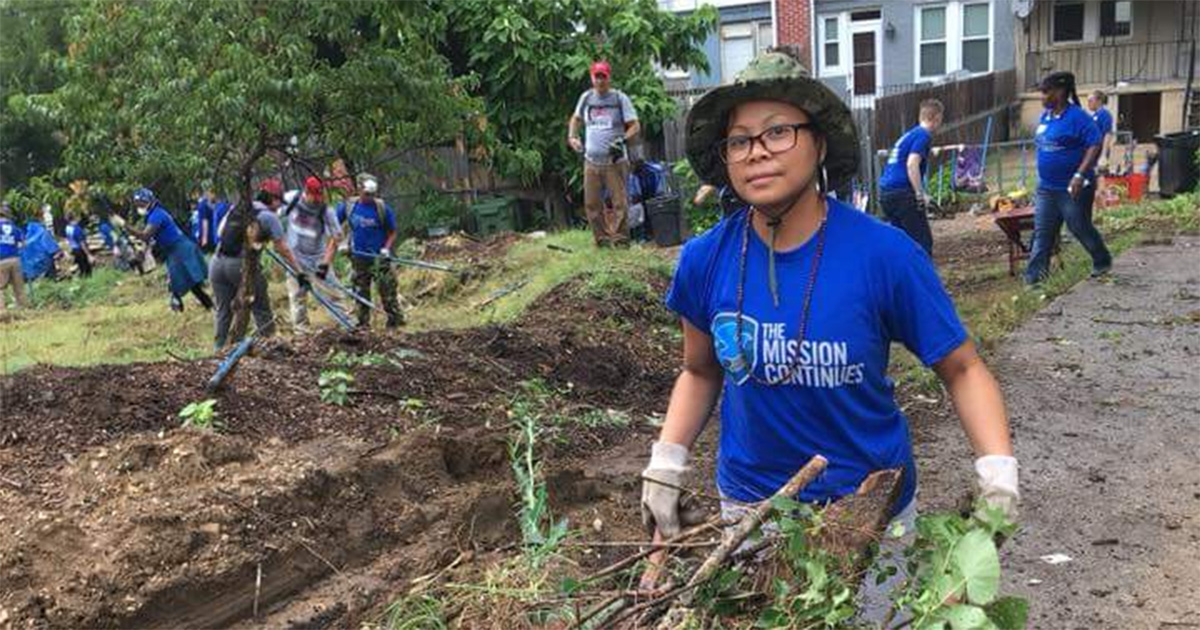 All My Military Motherhood 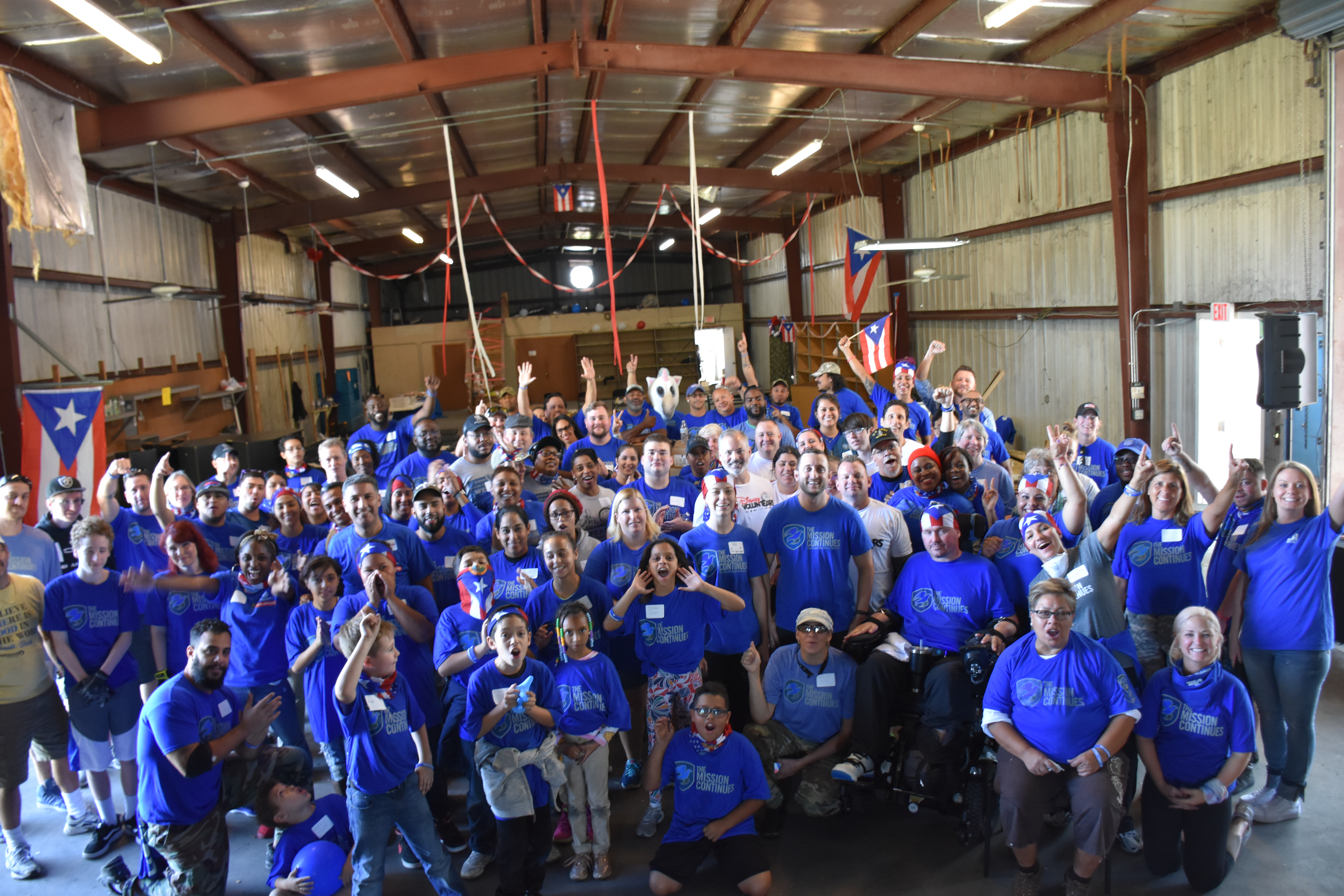 Connect with other Alumni 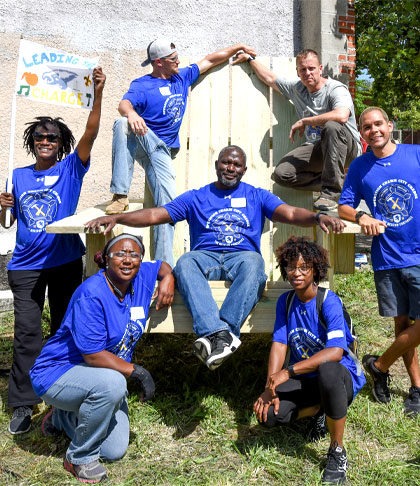 Join other philanthropic, service-minded alumni helping empower the next wave of veteran service.