How This Orlando Veteran Puts His Values into Action 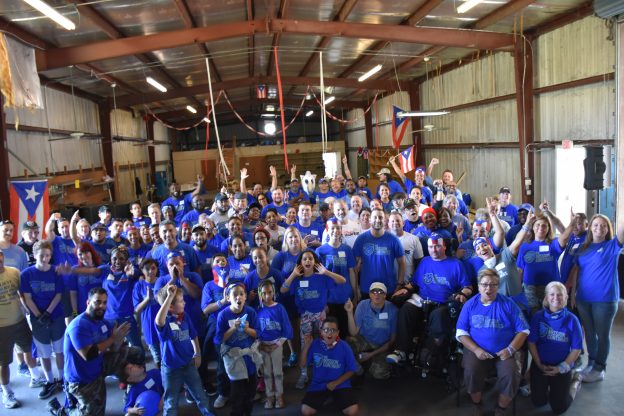 A renewed sense of purpose, a real impact on issues in my community, and a post-service legacy my daughters can be proud of — these are just a few of the reasons I’m proud to have chosen to continue serving with The Mission Continues.

On the morning of May 19th, 2010, I lost my right leg to a Russian legacy mine while defending Bagram Air Base from an infiltration attack involving suicide bombers in American uniform. It rocked my world and completely changed the trajectory of my life. Everything I had sacrificed to become a captain in the Army seemed wasted. I had a very difficult transition in to ‘the new normal’ and really felt like I was a floundering veteran.

In the summer of 2014 I made a decision that would propel my life forward in a new and positive direction. I decided to wake up early on a Saturday morning and head out to the Boys & Girls Club of Florida – Mims Branch to help build and beautify alongside my fellow veterans.

I knew I could expect that much, but I didn’t know what else to expect. What I found out there was camaraderie, ‘service therapy’, and Platoon Leader Lloyd Duran who seemed to know the importance of having fun while getting the job done. I could see the groundwork he had been laying and wanted to be a part of something bigger than myself again.

It happened to be Lloyd’s last project as a platoon leader, but I kept coming back to The Mission Continues in Orlando to volunteer under the leadership of Jay Parsons and then Daniel Kalagian and his wife Priscilla.

As a former 1SG, Dan was a natural at counseling veterans of all ages transitioning through difficult times. To say I was one of those veterans would be an understatement. It was an honor to join Dan and Priscilla as they took the Orlando service platoons to new heights, making a real impact in Central Florida.

Throughout Dan’s first year he would occasionally approach me about taking his place as the platoon leader, but I knew deep down that I wasn’t quite ready yet. I would spend the next year completing a Mission Continues Fellowship and getting my literal and metaphorical house in order to prepare for the upcoming leadership opportunity.

Dan stayed on as a platoon leader and encouraged me to shadow him while attending meetings and planning projects until I had a really good understanding of the team-building and administrative side of a veteran service organization.

I found out there’s a lot more to service platoon leadership than wrenches and paint brushes. At the end of the day, it was about bringing people together.

Two days before taking over as platoon leader, Hurricane Maria devastated the island of Puerto Rico. I anticipated thousands of evacuee families would be heading to Central Florida seeking refuge and, while at the Platoon Leadership Summit, I made it my mission to obtain approval from The Mission Continues to refocus our operations scope accordingly. The Mission Continues could not have been more supportive.

In the weeks and months to follow, The Mission Continues stepped up to assist Orlando in major ways. We provided logistical support and manpower at donation drive locations. We built seven ‘Mobile Market Units’ for the local food bank to fill and deliver to schools with the highest influx of Puerto Rican evacuee students. I personally went with a group called Iniciativa Acción Puertorriqueña Brevard to the state capital to advocate for them, and was proud to march as an honoree at the front of the Florida Puerto Rican Parade.

We received major donations in appreciation for our hard work, including a check presented by the governor. We used these funds to continue supporting the evacuee community still facing major challenges one year after landfall. Working closely with Hispanic Federation, we were able to bring together more than 120 volunteers from across the state of Florida and beyond, to assemble 256 pieces of furniture, refurbish 50 bicycles, and build over 100 welcome home kits.

Hurricane Michael struck the panhandle just a few days before our project, but we were able to adapt once again, and created over 1,000 hygiene kits.

In total, I’m proud to have brought volunteers together for 33 different events, every single one meaningful and impactful in it’s own way. From building, beautifying, and mentoring in underserved communities, to the safe space for homeless LGBTQ+ youth we supported in major ways, The Mission Continues gave me a vehicle to not only continue serving, but put my values into action. Chief among these: selfless service.