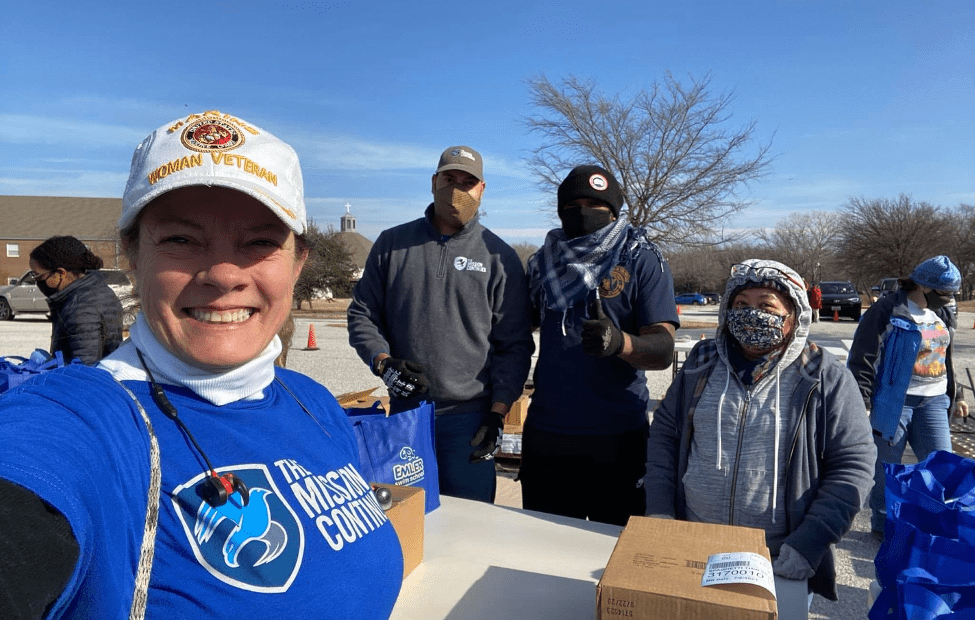 The Mission Continues has launched “Beyond 9/11: Operation Enduring Service,” a campaign marking the 20th anniversary of the terrorist attacks on September 11th, and kicking off the next 20 years of a veteran-led service in our country. REGISTER and serve with the DFW Platoon during the upcoming Dallas – Fort Worth Signature Service Project by clicking HERE

Angel Carter refused to allow PTSD, depression, and a frayed relationship with her family to define her life. As someone who understood personal tragedy, the terrorist attacks of September 11 offered her the opportunity to give back to those who served in the wake of 9/11 and overcome her struggle to grow and reconnect. As Angel witnessed the events of 9/11 unfold, she couldn’t help but stay glued to the TV for the rest of the day.

“I was horrified. Even though I had a complicated relationship with my family, I had to make a phone call home. I know they didn’t want to hear from me, but I had to tell them that I’m safe.” Angel was in a very dark time in her life even before the towers fell. It was not long after that she began therapy at her local Veterans Affairs hospital. “I just didn’t want to be around people, I didn’t want to go out. I would do my grocery shopping at two o’clock in the morning when they were stocking shelves and I was more likely to go to bed at 4 A.M. and get up at 4 P.M.”

But Angel was determined–she had a long history of struggling, pushing back, and eventually overcoming the many obstacles that kept her from accomplishing her goals. As a 19 year old college student, she met a Marine on campus and was inspired to join. “I wanted what they had. They walked taller, they were prouder and they had purpose. All of that comes from knowing they have a purpose greater than themselves in serving the country.”

Angel set out to join the Marines, but encountered her first obstacle: Women recruits were not counted in the monthly quota that Marine recruiters were tasked to fill, therefore no one would talk to her. To add to her struggles, Angel’s parents were fervently against the idea of joining the Marines because it seemed unladylike. At that moment, Angel felt like she hit a brick wall. Her determination eventually caused her family and the Marine recruiter to relent. Angel would go on to serve in the Marine Corps and participate in Operation Desert Storm.

The desire to serve in causes greater than herself was instilled in Angel during her time in the military. As she continues to battle depression and PTSD, Angel devotes her time and energy to helping others as a way to keep her off the couch and moving forward.

“Service gives me purpose, but I also recognize that it’s my responsibility to help others find their purpose. We try to create something that anyone would want to participate in and be a part of. And hopefully, we’re doing for someone else what I’ve been able to find for myself, the purpose and the feeling of actually doing something for others.”

On the 20th anniversary of 9/11, Angel will not be watching the news. She can’t bring herself to see the planes crashing into the Towers again. Instead, she will be planning her service project with The Mission Continues and calling the people she knows who were on Ground Zero during 9/11. “I want to give my personal thanks and gratitude to those people. Sam Horowitz, who was actually in the North Tower in an elevator on the day that the planes hit. John Salerno, who was a police officer on duty in New York on that day. I imagine it will be quite emotional.”

Report for duty in your community with The Mission Continues!
Serve with a Service Platoon at a service project near you! You can learn more about our programs like the Service Leadership Corps on our website and stay updated on the latest news and announcements on Facebook and Twitter.