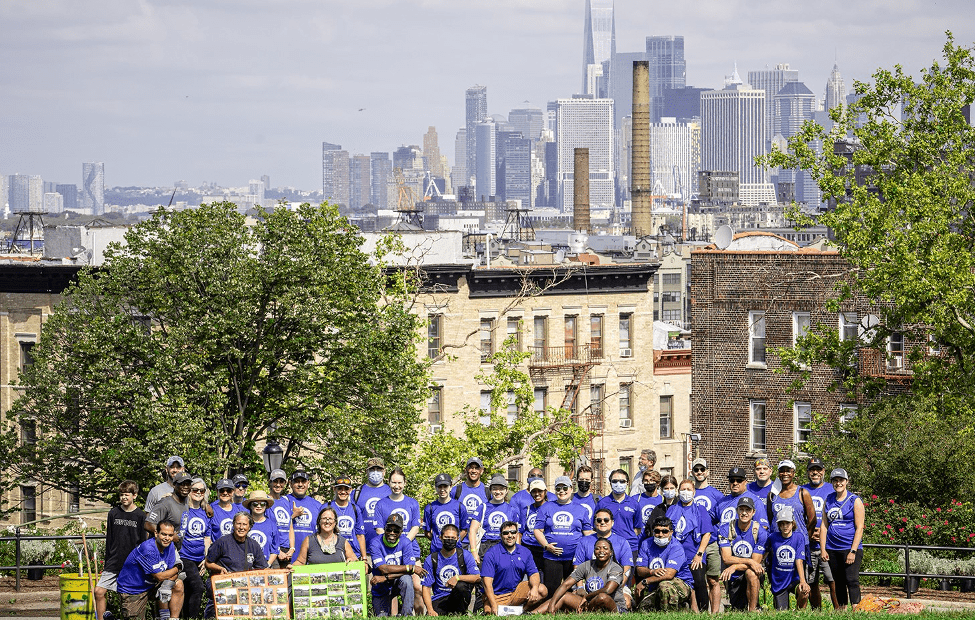 With a view of the Freedom Tower and Lower Manhattan skyline, more than 75 veterans and volunteers came together on a gorgeous Saturday to beautify and clean up Sunset Park Memorial 9/11 Garden in Brooklyn. Home to one of five official memorial gardens honoring those we lost that tragic day, this was a particularly moving place to serve for Operation Enduring Service. To learn more about Operation Enduring Service, click here

Browse through the photo gallery to learn more about the New York City Signature Service Project!

Sunset Park is a thriving community in need of the kind of sweat equity only The Mission Continues can bring. With a volunteer shortage because of the COVID-19 pandemic, routine maintenance on the park had to be deferred resulting in neglected gardens and overgrown vegetation. Veteran-led teams deployed across the park to plant hundreds of flowers, clear 30 garbage bags full of trash and invasive species, and paint 40 park benches for residents to sit and enjoy the views.

Led by Marine veteran Daniel Perez, a New York City native, this event was one of more than 60 happening around the country to commemorate the 20th anniversary of 9/11. And it’s not too late to join the movement, as there are projects scheduled from now until Veterans Day in November. Click here to join a service project in your area!

Faced with the realization that this “accident” was actually an attack, Daniel was overcome with confusion and concern, as his thoughts shifted to his family living and working in Lower Manhattan. Fortunately, his family was safe, but as a Marine infantryman, he could not help but think about what might come next. Click to read the full story about Read Daniel Perez’s full story here.

In the two decades since 9/11 veteran volunteers like Daniel Perez in New York City have led the way to improve under-resourced communities, responding to natural disasters, tackling food insecurity and advocating for the rights of others in the halls of Congress. We will never forget the sacrifice and service of our veterans and volunteers in the 20 years since 9/11 as we look ahead to the next 20 years of service in our communities. Join us in Dallas-Fort Worth on October the for the next Signature Service Project.