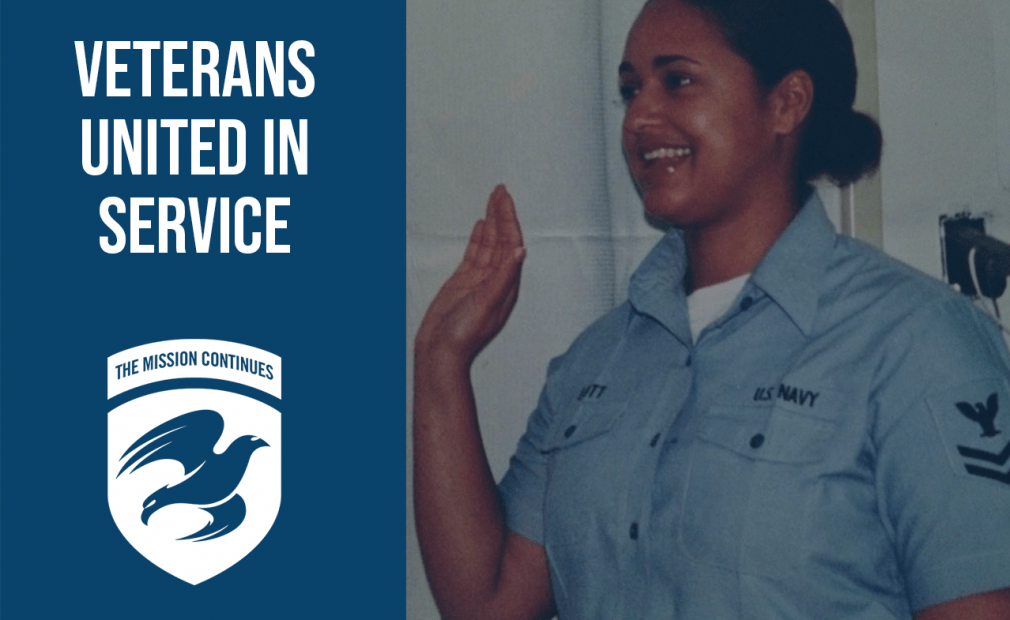 Kim Lott is a U.S. Navy Veteran, who served as an Operations Specialist onboard U.S.S Nimitz (1994-1999) and at Fleet Area Control and Surveillance Facility, Virginia Capes (1999-2003). She currently leads the Veterans Employment Services department at CareerSource Palm Beach County, overseeing service delivery to local veterans and eligible spouses. Kim is a member of Cohort 5 of the Women Veterans Leadership Program and serves her community with the Broward County Service Platoon.

“I have a confession to make. I’ve long felt like a fraud on Veteran’s Day. I’d receive “thanks” for my service, and even though I’d gladly outwardly receive the thanks, inwardly, I’d feel like a fraud because like most young folk with limited options and resources, I didn’t join for patriotic reasons. Many of us joined to escape our small towns, to travel and experience new things, to receive paid training in specific fields, and for the promise of future monetary educational benefits and a steady and reliable paycheck. We’d soon come to find that during our enlistments we’d take risks and make sacrifices that we simply hadn’t initially considered. We’d experience broken friendships, failed relationships, and miss many milestones. We’d go on unaccompanied tours and make last-minute transfers and moves. To meet uniform standards, we’d subject our natural ethnic hair to straighteners and force our bodies to maintain physical standards. We’d miss holidays, births, weddings, first days of school, graduations, and worse – the small seemingly insignificant moments that come with doing life daily with people we love.

Yet, we stood the watch.

We’d learn of family deaths from someone we’d never met, then often learn that because that relative wasn’t an ‘immediate family member’, we would not be allowed to abandon mission and travel home for the funeral. We’d look forward to the end of our agreed upon enlistment, only to be told that we were being mandatorily extended due to said mission. We’d work to exhaustion under oppressive schedules and deadlines and before cell phones, FaceTime/Skype or email, we’d go months on end before hearing from someone at home or receiving mail. We’d work on little to no sleep, pump breast milk in dark spaces, wrestle with the tensions between familial, personal, and missional needs, and face threats daily.

Yet, we stood the watch.

We’d bond with people who were at first fellow sailors, shipmates, and then lifelong friends. Some even becoming siblings in Christ. We were there when they’d marry and there for the heartbreak when their spouses left, crushing under military lifestyle pressure. We were there when they’d give birth and participated in each other’s weddings. We’d maintain many of these bonds through years and transfers, after enlistments had ended, and through diverging political affiliations and religious beliefs. Sadly, we’d lose contact with others.

Many would initially stumble navigating civilian life and the workplace. Knowledge, know-how, and succinct forthright speech is appreciated and necessary in the military whereas in the civilian workplace nuance and “relationships” is the name of the game. Some master it while others struggle while carrying with them images of war, carnage, and the threat thereof.

And it’s not often until AFTER we’d separate that many of us could fully appreciate just what our actions (even if not initially motivated by patriotic reasons) meant. It’s not until then that many of us ‘feel’ particularly patriotic

President JFK once said that he “can imagine no more rewarding a career. And any man who may be asked in this century what he did to make his life worthwhile, I think can respond with a good deal of pride and satisfaction: “I served in the United States Navy”

I’m here to tell you that ANY honorably discharged veteran (man or woman) of any U.S. Military branch can say the same! So, if you’re tempted to feel like a fraud on this Veteran’s Day, I encourage you to wholeheartedly and gladly receive those thanks for serving. You once stood the watch and America is better for it. Fair Winds And Following Seas, fellow U.S Military Veterans”

SHOW YOUR SUPPORT THIS NOVEMBER FOR VETERANS DAY

We’re extending past Veterans Day and dedicating the whole month to honor the sacrifices our veterans have made with their time in service. Join us this November to give back to the local communities that have welcomed our veterans home.