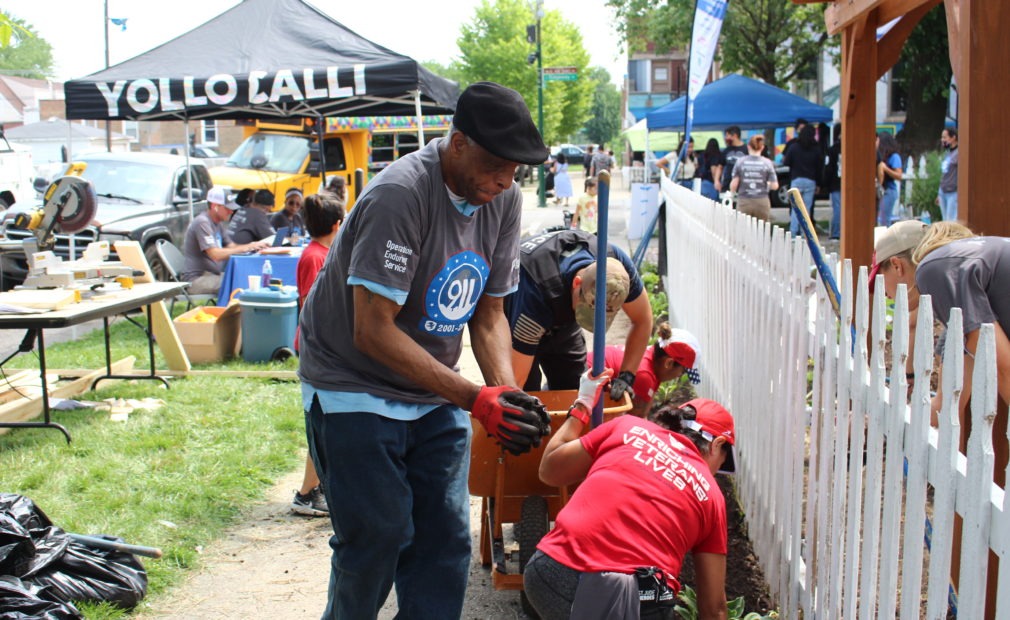 After the 9/11 terrorist attacks, volunteers and service members were called to step up and serve their country. Twenty years later, the passion to serve has not wavered. To honor the 20th anniversary of 9/11 and those inspired to serve in the two decades since that tragic day, we kicked off Operation Enduring Service with its first Signature Service Project in the Little Village neighborhood of Chicago on July 21st. More than 80 volunteers from across Chicago came out to finalize a two-year project to build an archway entrance, benches, tables, and structures at the community gardens. To learn more about Operation Enduring Service, click here.

Browse through the photo gallery to learn more about the Chicago Signature Service Project!

Led by Chicago Platoon Leader and Army veteran Rogelio Villa, veterans, volunteers and community partners assembled at Yollocalli Arts Reach and Enlace Chicago to beautify and refurbish two community gardens. These sites are vital to the Little Village community and serve as youth art and cultural centers, providing access to artistic resources as well as teaching neighborhood youth how to grow and nurture healthy fruits, vegetables and herbs. Members of the community and their families volunteered alongside law enforcement, local organizations, and community leaders to pull weeds, dig trenches, plant vegetables and lay gravel paths.

Through service in his community, Rogelio has created relationships that have deepened his sense of belonging and purpose after leaving the military. He said, “since 9-11, a lot of veterans like myself were inspired to serve the country. After we left the military, we wanted to continue doing that service and what better way than working in your community.”

On September 11, 2001, Rogelio was facilitating ESL classes for adult learners, mostly mothers, who were trying to learn English as a second language. He was driving back to work as he switched on the radio and began hearing the breaking news reports of the first plane hitting the World Trade Center.

“My thoughts were like everybody else’s—just trying to figure out what was going on. I pulled into an alleyway when I heard about the second plane,” said Rogelio. “The next thing I know, I got a call from work saying that they were closing down the building and, wherever I was, to stay put and wait for further notice.”

Nearly a year after that fateful day, Rogelio joined the Army National Guard as an infantryman. He was deployed to Afghanistan in 2008, not knowing exactly what he was hoping to accomplish but nevertheless driven by a sense of duty, purpose, and desire to give back.

“For me, I’m very proud to be able to be part of The Mission Continues in celebrating and honoring the 20th anniversary of 9/11,” he said.

In the two decades since 9/11 veteran volunteers like Rogelio in Little Village, Chicago have led the way to improve under-resourced communities, responding to natural disasters, tackling food insecurity and advocating for the rights of others in the halls of Congress. We will never forget the sacrifice and service of our veterans and volunteers in the 20 years since 9/11 as we look ahead to the next 20 years of service in our communities. Join us in Los Angeles on August 28th for the next Signature Service Project.