Kelly and Derrick Auguste: We Became a Family Through Service 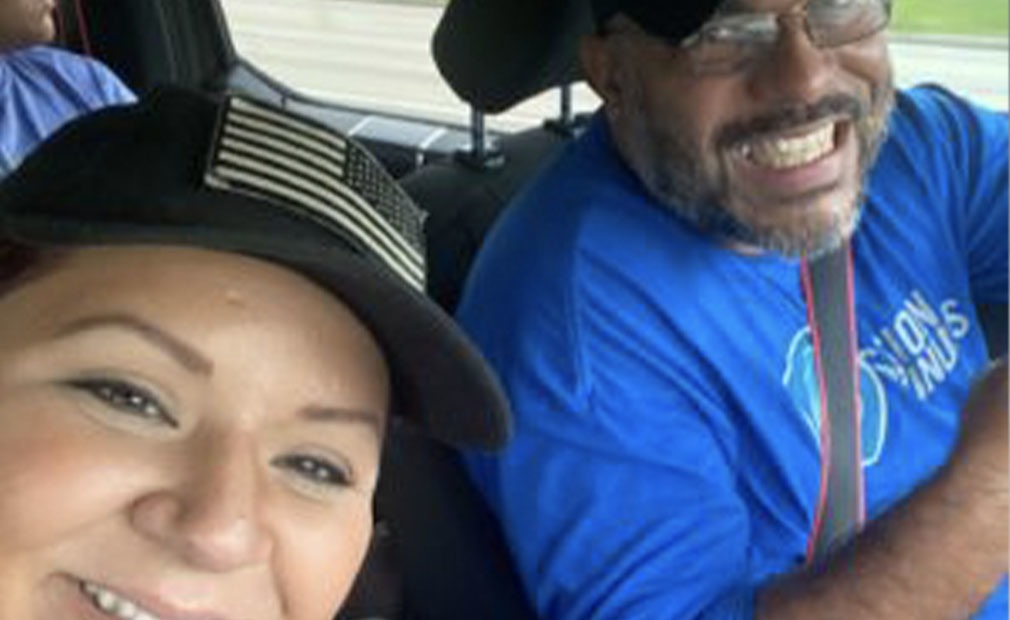 My father and brother served in the military, and I wanted to serve too. I was actually in training before I met Derek. We became teenage parents very quickly; at that point I chose to prioritize being a mom instead.

The morning of 9/11 I got a call from Derek’s cousin’s girlfriend—also my best friend—screaming and crying, because she couldn’t get in touch with her boyfriend who worked in Manhattan. We didn’t hear from him until hours later, because he walked home from Manhattan to Brooklyn. Only then did we understand who was safe and who was not.

My dad was drafted into the Vietnam War and was bitter from his service, so I had never really considered joining the military before 9/11. At the time 9/11 happened, I was in travel sales in the airport area of Miami-Dade County. When we heard about the attacks, it was so surreal. I had family members working in and near the twin towers. Most of them were ok, but one cousin who actually worked in the towers passed away that day.

Of course, business in my sector went dry overnight. I wanted to stand up for my livelihood and the American way of life. I realized that serving in the military was a great way to do that, so I signed up with the Army in 2004.

While deployed I called home at least once a week, but the conversations were short and opaque. I couldn’t tell her much of anything because I didn’t want her to worry. The calls were more of an assurance that I was still alive. I developed a unique and unhealthy relationship with death in an environment where the possibility of dying was a part of my everyday life. I didn’t deal with any of the mental or physical tolls of this experience until I got home after two years abroad. When we got back from Iraq, my unit’s divorce rate was 50%.

We were at “that point.” During those two years, our lives had grown in two different directions. And when Derek came home, he had the mindset that who he became in Iraq was just who he was now. He didn’t think he deserved anything better than to suffer. And I was like, well I don’t deserve to suffer in this misery—I need you present in this moment with your children. It took a lot of work to make sense of where we were personally and as a family.

Even though his Iraq tour was over, his next duty station would have him gone constantly for variable stretches of time—we never knew how long it would be once he got called away. It could be one week, two weeks, 3 months, you just didn’t know. This meant we could never plan together, and so my kids and I continued to have a separate life from him.

When Derek got out of the military, his family did too. The military takes care of military families, but there was no support for us once he was discharged. It felt like an umbilical cord got cut as our sense of security was ripped away. On top of that, I was dealing with someone who was falling apart in front of me. We were at “that point” again.

When Derek found TMC, I was all for it. TMC got him off the couch and gave us a way to create our own family stories, which we never had before. I went to almost all of his service projects. I loved getting into the community with the kids and I saw the positive change it made for him and for us as a family. It also made me realize that there are ways to help veterans, but our national system is broken. Looking toward the next 20 years, I see myself continuing to advocate for veterans and help people who are coming out of the military so we can make their experience smoother than ours was.

When I got home from Iraq, Kelly had a routine with the kids, and my presence made no contribution to that routine, it would only disrupt it. I didn’t want to become part of their routine because I didn’t want it to be ripped away whenever I would have to leave again. I taught my daughter that the time we did get to spend together was more important than the birthdays, anniversaries, and other milestones that I missed, out of sheer protection of my own guilt.

I got out in August 2015. I was naive about the transformative nature of my service to myself. I realized how much pain I was in, mentally and physically. While I was in the military I didn’t want to go to the doctor or allow my injuries to show because I didn’t want them to prevent me from being promoted or deployed. I was also unprepared for the shock of coming out of the constant emotional high of exhilaration or being on guard—it hits like a crash. I got extremely depressed.

One day I found The Mission Continues’ Fellowship Program at the bottom of an email, and their “serve again” message really spoke to me. I got accepted to the Fellowship Program in January 2016, and on my flight to Orientation I met the Miami platoon leader. He said, “I’m going to need you at a project coming up.” I ended up coming to that project and every one after that, and served as a platoon leader for two years.

One of the greatest gifts of doing TMC projects was finally getting to have shared experiences with my family. We became a family of service through rediscovering what I had most enjoyed in the military—leading and taking care of my troops. In the next 20 years, I see myself still taking care of troops in one way or another.