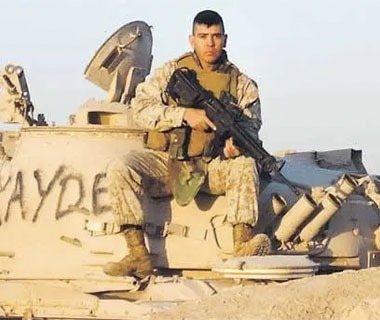 One of the reasons I fell in love with dance and the arts was its ability to tell important stories. As a young dancer, one of my college professors created a dance about the lives of children in Nazi concentration camps during World War II. I was completely riveted that I could tell important stories like this through dance. But once I became a professional dancer, I wasn’t doing anything like that—instead, I did a lot of performances only meant to sell tickets.

I felt like I wasn’t doing anything for the world. But I knew I wanted to help people. I wanted to be part of something bigger than myself. So in my mid-twenties, I decided to enlist in the Marine Corps as a reservist. I had a lot of military veterans in my family—people I really looked up to—so stepping onto the yellow footprints in the fall of 2000 gave me hope that I could make a positive contribution to the world this way.

After 9/11 happened, this feeling grew even stronger. I deployed to Fallujah in 2005 for seven months. Prior to deploying, my fellow Marines had painted a very bleak and violent picture of what life was like in Iraq—a narrative that seemed to justify our military intervention there. But as I served in Fallujah and worked with the locals, that narrative completely fell apart. It was hard for me to place 9/11 and the atrocities of Saddam Hussein in these villages with everyday people trying to live their everyday lives. I returned in 2006 and separated from the military in 2008. I came back with all this stuff in my head about what modern war was really like, and was trying to make sense of all the things that had gone on.

I decided to use my dance training to put these experiences on stage. I started choreographing stories of what had happened overseas. Through the arts, we were able to talk about the effect of the war on people in a very accessible way and offer a counter-narrative to the combat-centric one being pushed by mainstream media. I took this idea even further in my fellowship with The Mission Continues. I did my fellowship with the Battery Dance Company, whose director was interested in having me create dance workshops in Iraq to bring children together from divergent groups, modeled after a program successfully run by the State Department in various embassies around the world. These workshops allowed art and movement to work as a connector, forging relationships between children and breaking down barriers.

The culmination of my fellowship was a five-day dance workshop in Iraq with 30 youth from the Kurdish and Arabic regions. Their performance told stories of living through constant war; feeling betrayed when the US didn’t deliver on its promises; and how they were just like you and I—they just wanted to be able to walk to school without getting blown up, find a job that they were passionate about, fall in love, and raise a family.

This experience completely changed my life. I turned that project into a template for dance workshops that I now do in the veteran community and with other communities around the world. It was a long and winding road, but I finally found a way to create art that really affects people in a positive way.