Rogelio Villa: Meaning and Purpose In Our Hearts and Hands 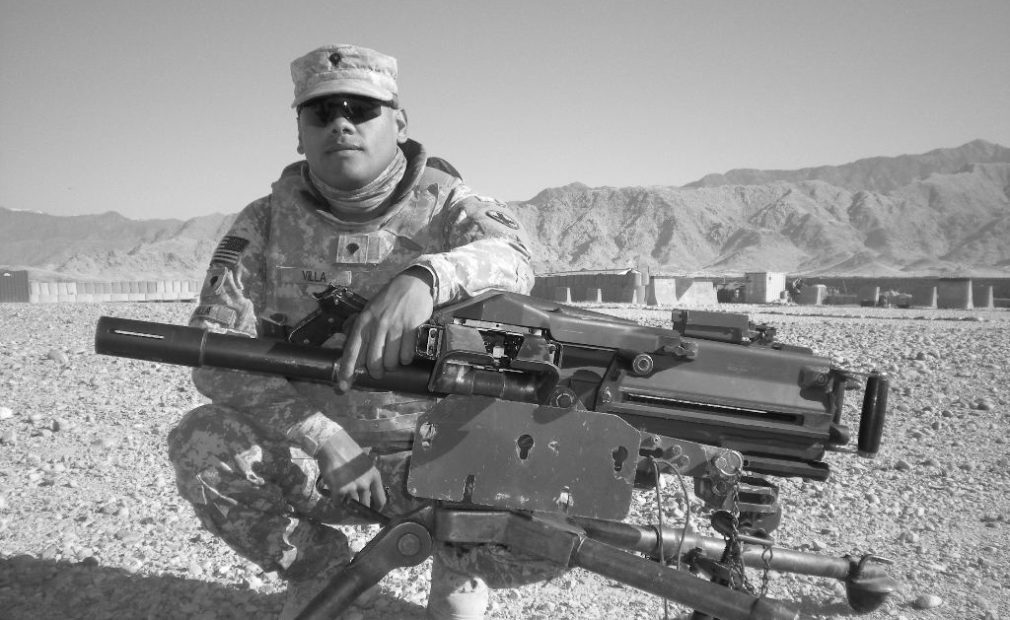 Rogelio Villa always had an interest in joining the military, but when he became a father at 17 while still in high school, his life unexpectedly changed. It would not be the last time.

“When 9/11 happened, I was on my break. I was facilitating ESL classes in a Catholic church we were using as a space for adult learners, mostly mothers, who were trying to learn English as a second language.”

Rogelio is a son of immigrants who grew up in a predominantly Mexican-American community in Chicago. He was driving back to work as he switched on the radio and began hearing the breaking news reports of the first plane hitting the World Trade Center.

“My thoughts were like everybody else’s—just trying to figure out what was going on. I pulled into an alleyway when I heard about the second plane. The next thing I know, I got a call from work saying that they were closing down the building and, wherever I was, to stay put and wait for further notice.”

He felt a wave of emotions. First shock and confusion, which led to anger and concern for his family. After calling his wife to check in and determine that his kids were safe, he then felt sadness.

“That was ultimately the feeling that I had at the end because of all those lives that were lost or missing. 9/11 made us realize that we’re not invincible but it brought in a sense of purpose, community, togetherness, and unity across the nation.”

Nearly a year after that fateful day, Rogelio called the Marines, the Army, and the National Guard. The Guard were the first to show up at his door. He joined the infantry and deployed to Afghanistan in 2008, not knowing exactly what he was hoping to accomplish but nevertheless driven by a sense of duty, purpose, and desire to give back. Rogelio was attached to the 1st Infantry Division overseeing the area of operations in the Laghman province of Afghanistan. He describes his deployment as a unique, once in a lifetime experience.

I was a gunner, and I participated in different missions from EOD, security, PSD security detail, QRF, as well as humanitarian assistance.

“I was in firefights, contacts, pulled security, was a convoy gunner; I even got to provide security for the schools there. We did humanitarian support missions where we got to meet the locals. It was amazing, I was still feeling like I was doing my part after 9/11.”

After Rogelio transitioned out of the Army National Guard, he held on to the desire to serve others that attracted him to join the military. He volunteered with the YMCA Urban Warriors in Chicago to connect veterans with at-risk youth. While working to organize group support sessions on the weekends, he was introduced to The Mission Continues. He would go on to volunteer, and eventually earn a position as the Chicago Platoon Leader.

“It was awesome because now I feel like I have these tools to help me do my work and I’m still there now. It’s funny because it looks like I keep coming back to that community where I was born and raised, where I found out about The Mission Continues, and where I was when 9/11 happened.”

Rogelio currently works as a Veterans Affairs certifying official for Kennedy King College, helping veterans go back to college. He intends to commemorate the 20th anniversary of 9/11 by supporting his partners in youth violence intervention and leading the Chicago platoon.

“I hope to get out there to do some good work and continue to serve, but instead of serving with weapons, serving with a sense of meaning and purpose in our hearts and in our hands. 9/11 is a sad chapter in this country’s life. But I think it’s also great to be able to honor those who served and those heroes who never made it back. I think there’s no better way than to continue doing work in my community and to honor them through service. For me, I take great pride and I’m very proud to be able to be part of The Mission Continues in celebrating and honoring the 20th anniversary of 9/11.”