A News Anchor’s Experience at Our Mass Deployment 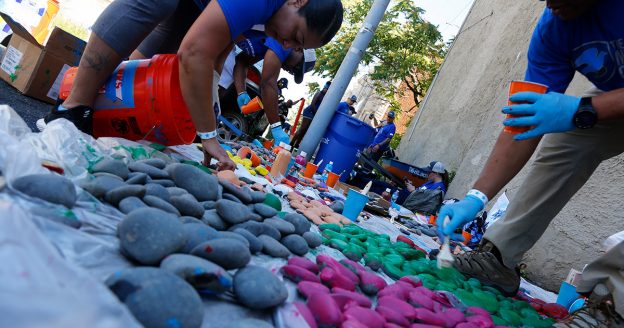 (On duty with Operation Charm City Charge, a group of more than 90 veterans from 24 states, tackling pockets of the city that need their grit and greatness.)

It was 0900 on a Saturday morning and I was about to find out what I was made of—alongside some of America’s veterans.  We were tackling vacant lots in Harlem Park West as part of The Mission Continues’ week-long Mass Deployment that chose Baltimore for what is called Operation Charm City Charge. On this day, veterans, community leaders and volunteers had 7 hours to make magic.

Our team’s goal, which included a group of my colleagues, organized by the tv station, was to build a peace park on Lanvale Street and McKean Avenue—all that was there was an overgrown lot with promise. We were there to deliver that promise— with a rock garden, rock river, peace poles, bamboo wind chimes, benches and chairs.  We had until 4 o’clock to get it done. It was like one of those HGTV shows, without the commercials and the dramatic big reveal.

We started unloading heavy bags of mulch from a U-Haul, forming a line under the leadership of people like retired Army Specialist Paul Vincent. It worked beautifully until someone dropped a bag—that would be me. I was delicately removed from the line and kind of re-purposed as a sideline cheerleader. That was ok, I was ready to start clearing the lot. We had so much equipment, I couldn’t choose a tool. When I found one that looked like what everyone else was using, I grabbed it and tried swinging it back and forth like some of the veterans. How come they were chopping stuff down and I was just flailing?  I started to think, this was going to be a very long day.

Then I began doing what I do best and what has never felt like heavy lifting to me. I began to talk to and listen to some of the veterans. They don’t boast about their service, but they sure could. My leader for the day, Army Specialist Vincent, served 7 tours of duty, three in Afghanistan, two in Iraq and two in Bosnia.  He was injured by a grenade outside of Kandahar in 2004 and medics resuscitated him twice. He had 13 surgeries in 46 days. Since coming home, he has learned to cope with debilitating depression. But this day in Harlem Park West, a neighborhood not unlike where he grew up in Chicago, makes him feel like he is doing something important. He added, “like I belong.” I could tell something emotional was happening behind his large, dark sunglasses. So, I did what I also do best, I hugged him.

When you work side by side with people like Paul Vincent, whatever you feel you can’t do, you realize you need to try harder.  I am not very good at the heavy stuff, but I jumped in to do everything else. I helped with a wind chime installation, that involved laying concrete.  Yes, my job was as the leveler, but I took it very seriously. I hammered stakes, I raked mulch, I painted. I mirrored the veterans, who just seem to keep going, choosing task after task, realizing things just have to get done. I am very grateful to a Sergeant First Class David Dubois, who seemed to take me on as his “project” and make me feel like I have something to contribute too.

By the end of the day, our unit had transformed this little corner of West Baltimore, and a number of other corners in Harlem Park West as well.  I have included pictures, but I don’t think it really does the day justice. I really encourage you to see the work in Harlem Park West and, if you feel so inspired, The Mission Continues could use more volunteers for the rest of their tasks in Brooklyn and Curtis Bay. Wherever you are, if you see someone wearing a blue t-shirt that says, “The Mission Continues,” thank them for their service. Their service for Operation Charm City Charge is the right deployment at the right time for us.

(Note: Last year, during Operation Watts is Worth It in Los Angeles, the veterans and local volunteers put in 6,920 hours of service during the week-long deployment.)

Note: This story was originally published on Facebook, which you can access here. Deborah Weiner kindly granted us permission to reshare her story on our blog.