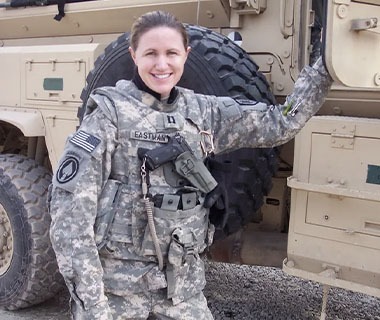 I have forever been shaped by the power of service.

In September of 2001 I had recently graduated from college and was thinking about who I wanted to be and how I could make a difference. I was getting ready for work in the morning when my mom called. “Marjorie, turn on the TV. We are being attacked.” What did that mean? It was the strangest thing I ever heard. I turned on the TV and immediately felt chills go through my body. I watched as the first tower burned. And then, like so many Americans, I saw the second plane hit. It was very clear to me that the world was absolutely going to be different.

In the days and weeks afterward, there was this overwhelming sense of our country coming together. It was one of the most positive and powerful feelings I’ve ever had in my life. That feeling invigorated and inspired me to get involved in my country in some way. This was my generation’s time to rise.

I spent my first two years enlisted and did my first combat tour in support of Operation Iraqi Freedom in information operations. I helped materialize and distribute the Defense Intelligence Agency’s deck of playing cards with the military’s most wanted individuals, Saddam Hussein famously being on the ace of spades. I received my direct commission when I got back and spent the next eight years as an officer.

By my second combat tour in 2009 I was a commander in the intelligence community. I had an amazing company of full-spectrum intelligence operations war fighters who were on those frontlines. The entire experience and culmination of it all was so absolutely incredible that I wrote down my memories and stories from that time into a book, The Frontline Generation.

I ended up separating from the military when my little boy was diagnosed with cancer. Today, my son is nine and cancer free. As a civilian, it didn’t take much time for me to long for my fellow service members. I missed being around so much diversity and so many people that are so laser focused on one thing in common: service. That thread tied us all together. There was something so powerful about being part of something like that. So I started Googling to find a way to volunteer with veterans—and that’s how I found The Mission Continues and reconnected with my home team.

One of the greatest lessons I learned from The Mission Continues that I continue to do is to look around your community and see how there is so much that needs to be done. If someone’s not doing it, then find your battle buddies and do it together.

The 20th anniversary of 9/11 is making me think about the frontline generation that came together to stand up to the evil of terrorism and work toward something better. Service has changed us all, and it changes us all for the good. After coming home, we’ve continued to find new frontlines and step up.