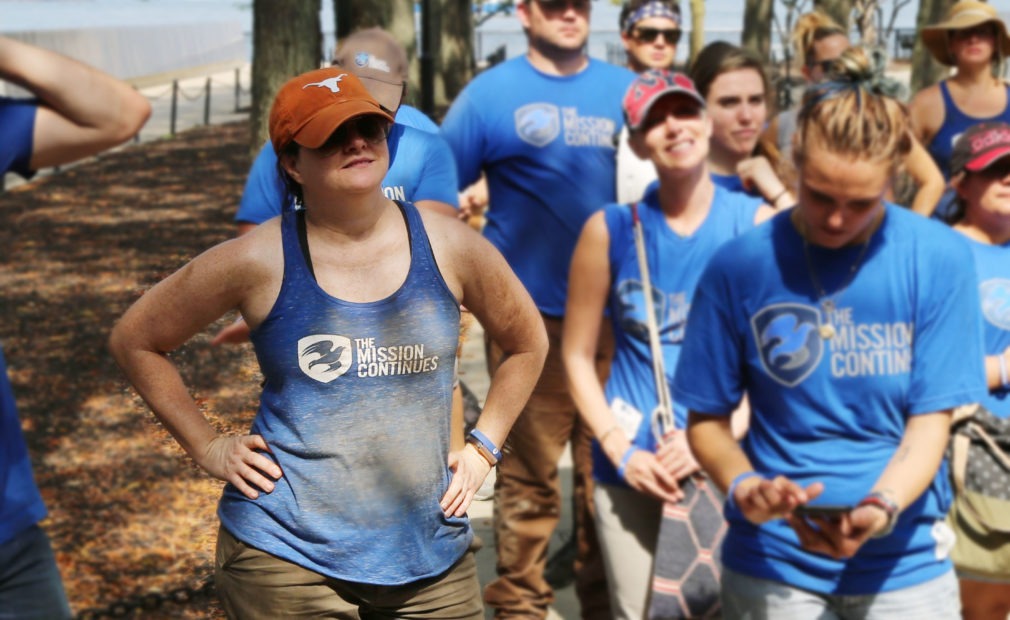 What a gorgeous blue sky, I thought as I made my way past the coffee carts between the World Trade Center Towers en route to my new job, which was on the 11th floor of World Financial 2—a set of office buildings that encircled the Twin Towers. I moved to New York and started with Merrill Lynch on Sept 6, 2001.

I was standing in my new boss’ office doorway when we heard a loud, booming noise and ran to the windows. Thick, dark black smoke was pouring from the large hole in the side of the North Tower and flames were visible. One of my colleagues in the next office began shouting “Oh my god. Those people are on FIRE. Look down!” Sure enough, there were people—engulfed in flames from head to toe—running and dropping to the ground to extinguish the flames. (Years later I learned that this happened because jet fuel from the first plane traveled down the North Tower’s elevator shaft and ignited in the lobby.)

There were no announcements in the building. My boss quietly said “I don’t like the look of this, let’s go downstairs. Worst case, we get a cup of coffee and are all back at our desks within the hour.” So, I and about seven of my new colleagues—some of which I had met for the first time that day—took the stairs to the ground floor. As we exited and walked away, there were papers and debris floating down from the building like confetti from a parade. One of my colleagues was on the phone with her brother—a NYC police officer—who confirmed it was a plane that hit the building. I remember someone saying, “Did the pilot have a heart attack?”

Shortly after we assembled near the Winter Garden Marina, we heard a very loud rumbling sound accompanied by a whistling noise—like an engine revving. My boss Mike shouted “That’s a JET—that’s a United jet!” And we watched as the second plane crashed straight into the South Tower of the World Trade Center.

I hadn’t yet contemplated that this could be anything other than a horrible accident—even while justifying that any lucid pilot would surely act to steer the plane away from a massive building. While looking back at where the plane had crashed into the Tower, I witnessed what I initially thought were couches being thrown out of high windows. Upon reflection, I suspect my mind went quickly into denial mode to protect me from absorbing what was really happening.

My worried parents’ calls from Michigan eventually got through the jammed lines. My mother was the first person to confirm for me that this was a terrorist attack. “They’ve grounded all flights in the US, but there is still one plane missing,” she shared. Finally, I understood that we were under assault. After that point, we had less information than the people across the country watching the TV. As phone service was intermittent, mixes of truth and rumors spread that sounded like something out of a movie like Independence Day.

We then heard a loud roaring noise reminiscent of when we heard the United jet. Quickly I realized that it wasn’t the missing plane, but that the noise was coming from the collapse of the South Tower. The utter shock of watching the building compress floor by floor was quickly replaced by the realization that a large cloud of what looked like smoke was roiling towards us. This part felt like it was unfolding in slow motion. As some people ran past us, I remember thinking, That dust is moving fast…really really fast. Someone in my group shouted, “Get down!” and instinctively, we formed a tight circle, put our heads down and crouched close to the ground as a WHOOSH of dust and debris engulfed us. After it passed, a white chalky, dusty debris filled our hair, eyes, mouth and shoes.

The North Tower was slowly and methodically dwindling down. I was naively convinced that the engineering of the building and the pace of the burn would somehow prevent its collapse. But after a short time, we once again watched as a cloud of dust made its way over towards our gathered crowd. Less intense or perhaps less surprising than the first time, we prepared and allowed it to wash over us again.

It sounds kind of corny now, but I distinctly remember watching as the dark cloud of debris moved out of the area, and through the clearing we could see the blue sky and the Statue of Liberty. It seemed even then like a “sign”—some hope that we’d be OK.

I evacuated Lower Manhattan thanks to a large, organized flotilla. I’ll never forget catching the first glimpse of the destruction through the lingering smoke as a small commercial tugboat brought us uptown. Our office building was left standing, but the entire side where our offices had been was sheared off. What I would learn 17 years later is that the evacuation of Lower Manhattan ranks as the largest civilian boatlift in history—larger than Dunkirk.

It would be another few weeks before I learned of the deaths of several former colleagues and schoolmates, and it was impossible to be anywhere downtown without seeing numerous “Missing” posters taped up everywhere. The city was forever changed—as was I.

Through working for The Mission Continues—a nonprofit that empowers military veterans to continue to serve the country in new ways—I have learned a great deal about mental health and how the brain and body can hold trauma. When I started there, stories of 9/11 and terrorism brought to the surface what I had been previously able to lock away for years. I will forever be grateful to a good friend and Army veteran who listened to my story and understood that the new onset of panic attacks and nightmares around each 9/11 anniversary were classic symptoms of post-traumatic stress.

At this point I have worked for The Mission Continues for more than 9 years. As I reflect on the upcoming 20th anniversary of the 9/11 terrorist attack, I see that my work has helped me make meaning of those events and to feel a sense of purpose in my life. I’ve also had the great privilege of becoming close friends with many veterans and first responders for whom that day also held deep relevance. I am eternally thankful to the men and women who literally or figuratively ran towards the Towers, sacrificing their own safety and lives, and I hope that sharing my story will further honor their selflessness.