Jeaniel Image: Making Connections and Being Together 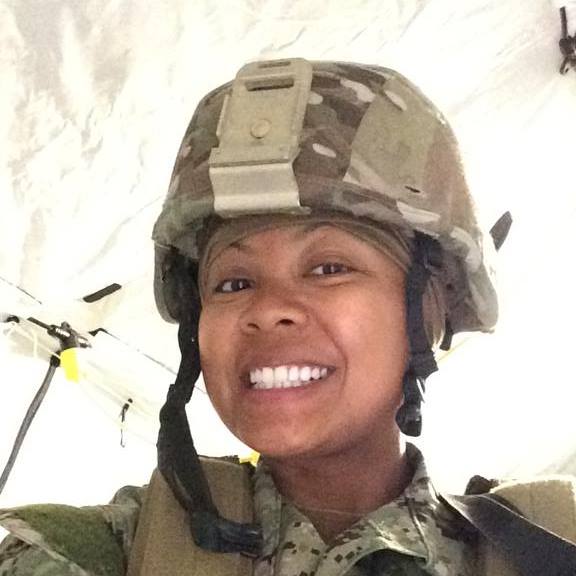 I joined the Navy to go to college and then when 9/11 happened. I woke up and my family were watching the news. I thought they were watching a movie because nobody was talking; they were just taking in all the information. I originally joined the military because of the G.I. Bill and was in the delayed entry program for the Navy when 9/11. For three days straight, I couldn’t stop thinking about it, why it happened, and what does that mean for me in the Navy?

It was scary, but interesting all at the same time. I felt a sense of purpose after getting out of boot camp and going to the ship. I ended up on an aircraft carrier and they were trying, as quickly as possible, to get the ship and the squadron qualified, trained, and ready to go. It was very intense but in a meaningful way, I remember the days were long, but they went by so fast. We went on a nine month deployment to the Gulf and when you’re on an aircraft carrier, you don’t get to see what’s happening on the ground. There’s a little bit of a disconnect but we’re the first ones to get there and the last ones to leave so it kept that sense of purpose for me to continue doing a long, nine month deployment.

At the end of the deployment we had a “steel beach” picnic because we couldn’t anchor in or pull to port because it’s too high risk so we barbecued out on the flight deck and brought out a bunch of kiddy pools. Those kinds of moments bring out the good in deployments. It sounds crazy and so simple, but it was worth it. I don’t know if that makes any sense, I think you have to be in it to understand it sometimes because it sounds crazy.

Both my husband and I wanted to pursue our military careers but I left the Navy because we had our son. My husband ended up getting out because of the tsunami relief in Indonesia. He was part of that mission and couldn’t handle it anymore. We more or less avoided the thought of him having PTSD, only for it to catch up to us later on multiple trips to the emergency room because of anxiety attacks. That’s what pushed me to start looking to veteran service organizations and led me to The Mission Continues. It was more about serving the community and the public and being reconnected.

I did the fellowship program at The Mission Continues and finally there was one service project that my husband came out to. It was after Hurricane Irma and we were fixing a Vietnam veteran’s house. My husband and the Vietnam veteran really connected. He just started crying because he saw all these people who were there to help him. He couldn’t believe that we were all there and that we were all veterans. That was the the turning point for us.

The Mission Continues has done so much for me. Not only did it give me an outlet to reconnect with other veterans like me but other female veterans. The first two projects I went out to there were female veterans who are leading. For a while I’ve always taken a backseat because sometimes, in the military, even though you have the skills and the knowledge you get placed on the second string because you’re not a male. That was the first time I got to see these ladies in leadership positions taking over the entire project. That kind of inspired me to keep doing more with The Mission Continues.

When I realized that it had been 20 years since 9/11, it was eye opening to me because I doesn’t feel like it has been that long. As I look back and see how much my kids have grown, it really sets it in. When my husband and I talk about it, its hard because we start reminiscing about how many were lost along the way. It really hits hard for me thinking back 20 years, because I think of them when we first were serving together and how much fun we had at these steel beach picnics and I have very fond memories of my shipmates that are no longer here.

I’m a huge advocate for trying to get people out and making connections and being together in proximity. That’s what’s going to help us moving forward because I think there’s a sense of emptiness, especially after what happened in Afghanistan. Being connected and being able to talk to each other helps to fill that gap and move past it.