Chris Marvin: Shifting the Narrative from Victim to Leader 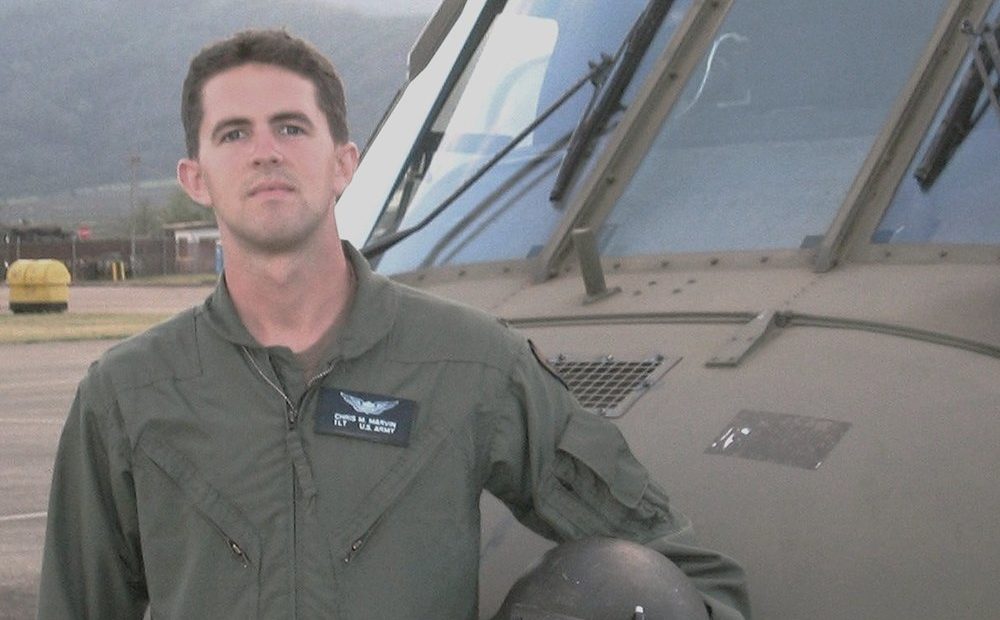 After high school, Chris Marvin’s plan was to attend Notre Dame on an ROTC scholarship, serve out his commitment to the Army, and move on with his life. It was 1997, and he could not have imagined how his plans would be altered by the longest war in US history, where he flew 40 combat missions before being severely wounded in a helicopter crash near the Afghan-Pakistan border.

By September 11, 2001, Chris had graduated and was holding orders to report to flight school. When Chris heard about the planes hitting the Twin Towers – feeling anger, confusion, and a desire to do something – his active-duty report date could not come soon enough.

“You first hear about a plane crash, and then you start to realize that there’s terrorism involved and that it’s an attack on our country,” said Chris. “As someone who hadn’t yet served in the military, but had been through four years of ROTC training and had that military mindset, you immediately start to problem solve and try to figure out where you can play a role and how you can help.”

A year and a half later, Chris graduated from flight school at the top of his class and was assigned to a Black Hawk helicopter unit in the 25th Infantry Division in Hawai‘i. He deployed to Afghanistan in early 2004. Stationed in Kandahar, Chris ferried troops and supplies throughout the country. Just four months into his combat tour, during a joint mission with Marines in a very hostile area of the country, Chris was wounded in a helicopter crash that tragically ended his deployment and ultimately his aviation career. Chris remained on active duty for the duration of his recovery, which lasted four years, through ten major surgeries and thousands of hours of physical therapy, all leading to his medical retirement.

One afternoon Chris was driving home from physical therapy listening to a radio essay from Ken Harbaugh, one of the founders of The Mission Continues. Ken spoke about the unique experiences of post-9/11 veterans and how The Mission Continues hoped to help wounded veterans volunteer in their communities. For Chris, it was an epiphany. Despite still being in recovery, he wanted to give back. He reached out to Ken, and was soon volunteering 40 hours per week leading TMC’s original Fellowship Program, while still recovering.

“I look back at how much The Mission Continues has grown, expanded, and affected so many lives,” said Chris. “I have always turned back to the example that TMC is not giving things to veterans, they’re using veterans to accomplish something, do better in our communities, and change the way we think about veterans in this country. The Mission Continues shifts the narrative on the way veterans are seen from a victim mentality to a leadership and empowerment mentality.”

Chris credits his time at The Mission Continues–both as a volunteer and an employee–with his acceptance into the MBA program at The Wharton School at the University of Pennsylvania and his career path that followed.