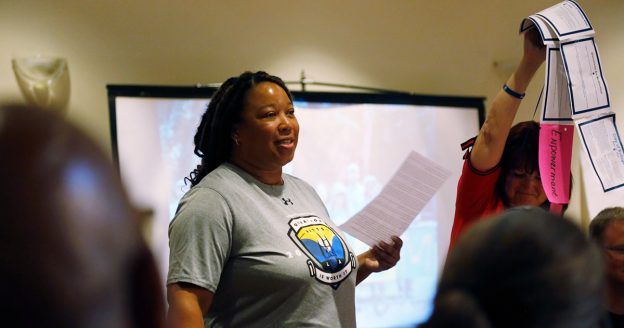 Warriors, it’s time for story time told by the best storyteller, Catrice.  And the story goes …

One day, Ryan got in trouble with the Supreme God of Nature, Scott. Angry over something or other, Scott had declared that man did not deserve fire. Because Ryan had such a kind heart, and he knew how much man needed fire for food and warmth, Ryan gave man the secret of fire even though Scott had told all the gods not to do that. Scott was furious that his order had been ignored. As punishment, Scott chained Ryan to a rock for many years.

But that was not enough punishment, not for Scott. Once Ryan was chained to a rock, Scott went after Ryan’s brother, the gentle long-haired giant, Eric. Scott did not chain Eric to a rock. Scott had a more sneaky punishment in mind.

First, Scott ordered the gods’ handyman, the maker of things – Paula – to make Scott a daughter. Paula made a woman out of clay, a beautiful woman. She brought her to life, and then brought her to Scott. Scott named his lovely new daughter Courtney Pandora.

Scott knew that Eric was lonely. Scott told Eric that his brother, Ryan, had to be punished and that’s why he was chained to a rock, but he felt sorry that this punishment left Eric without the company of his brother. That’s why Scott had decided to give Pandora in marriage to Eric. It was not the truth of course, but then nearly everyone in the ancient world knew better than to believe the mighty Scott.

Eric was kind-hearted and gentle and thoughtful, but he was no fool. He knew Scott was up to something. But he loved Pandora at first sight.

Eric heard her weeping. He came running. Pandora opened the lid to show him it was empty. Quickly, before she could slam the lid shut, one tiny bug flew out. She gave Pandora a big buggy smile in thanks for her freedom and flew away.

That tiny bug was named Donna from TMC. She had a shield with a dove/eagle image affixed to her chest and said, “No worries my warriors, together we will help keep the box closed.”  She was such a “Charm” in the “City” and “Charged” forward. TMC vowed to make all the difference in the world, giving communities hope, faith, strength and love.

Are you prepared to open Pandora’s Box and report for duty in your community???